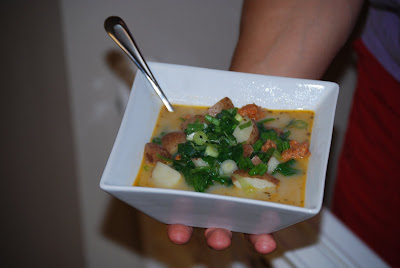 With fall around the corner, I'm definitely in the mood for soups! I just made the clam chowder last week, so I was hoping for something totally different. My mom actually gave me the idea to put together a sausage and potato soup. She likes to add whatever veggies she has on hand, so that's what I did.

I used the scraps left over from a rotisserie chicken to make my own chicken broth. Place everything that's left of your rotisserie chicken into a soup pot, cover with water, and simmer. Mine simmered for maybe five hours over the course of two days, but I'm sure you could do less.

In a soup pot, saute the onions in a small amount of olive oil. Salt them right away so that they release their juices and soften, rather than browning. Move the onions off to the sides of the pot and add the sausage to the pot. Cook it through.

I found that my sausage was a little more fatty than I planned on. I dealt with it by continuing on making the soup the way I planned - when it was simmering later, I simply skimmed the fat off the top. Next time, I might have cooked the sausage first, drained it, and added it back to the pan at this step.

Add the potatoes to the pot. Stir to coat the potatoes in the oil, onions, etc. Pour the chicken broth into the pot and bring contents to a boil.

Simmer on your stove until the potatoes are fork tender. I garnished mine with green onions and fresh basil. Simple and delicious!
Posted by Amy at 9:03 PM