Ciao Italia - The Feast of the Assumption 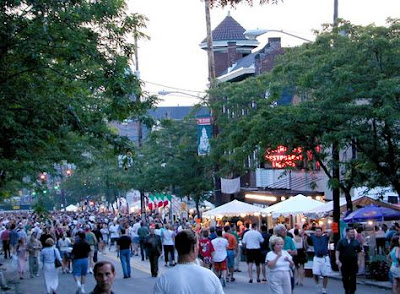 One of my very best friends came to visit me the weekend of August 14-17. Erin and I have been close since high school, and she is the first of my Connecticut friends to make the trek out since I moved to Ohio. Erin’s visit coincided with the Feast of the Assumption – always a time for celebration in Little Italy’s all over the country, and Cleveland is no exception. During the four day “Feast”, over 100,000 people travel to Cleveland’s Little Italy to pray, shop, and EAT. They close Murray Hill for the duration of the four days, and all the local restaurants set up tables lining the avenue.

We went to the Feast on Friday night, and feast we did. Before we met up with the rest of our party, I had devoured a bowl of penne pesto and Erin had eaten a bowl of cavatelli marinara. We met up with Ann, Vern, Jimmy, and Katelynn, and proceeded to Feast! While Erin and I took a breather, Jimmy chowed down on a lamb wrap, Katelynn balanced a huge bowl of pasta with meatballs, and Andrew and Vern went in search of sausage sandwiches, but changed their mind when they saw the stromboli tent. Andrew, Ann, and Vern opted for the strombolis – by far the longest line at the Feast – beautiful “stuffed sandwiches” made from dough wrapped around various toppings. The guys took a break to smoke cigars while us girls ventured into some of the galleries and little shops lining the street.

I am a huge fan of corn on the cob, as anyone who knows me can attest, so I jumped at the chance to wolf down an ear of roasted corn. It was perfectly buttered and salted by a man who, when I apologized for having to break a $20 on a $3 ear of corn, told me “Being beautiful means never having to say you’re sorry”. 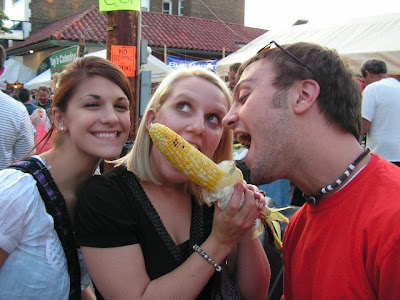 Ann and Erin were thrilled with their waffle ice cream sandwiches – two Belgian waffles stuffed with a brick of delicious vanilla ice cream – and Jimmy and Katelynn opted for a gigantic elephant ear. On the way out, we indulged in gelato – I chose lemon, Erin picked raspberry, and Katelynn opted for the watermelon. Homemade gelato is getting easier to come by as it gains popularity in the US, but this was some of the best gelato I've come across. 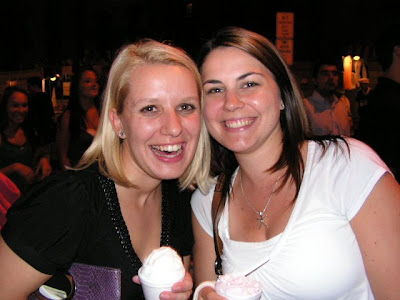 It was great fun to show Erin around Little Italy...all in all, the Feast was a fab time, as usual. It’s always a crazy crush of people, difficult parking, and scary toilets, but the food makes it worth the trip!
Posted by Amy at 12:12 PM