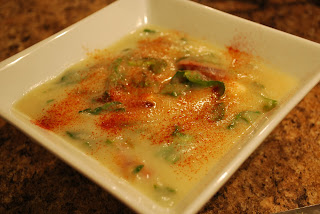 Pictures don't do this soup justice.  Smoky andouille sausage, crisp cauliflower florets, and vibrant fresh spinach combine in this rich, velvety soup that's easy enough to throw together on a weeknight.  The bonus?  It's not half bad for you!

While I was telling my mom about this soup, we got to talking about the origins of andouille.  The recipe says you can also use chorizo, which has Spanish origins, but I was only able to find the andouille.  My firmest recollection was that andouille was a "New Orleans thing" often used in Cajun cooking - gumbo, jambalaya, etouffee.  As it turns out, I was partially right - andouille has French origins and is now most closely associated with Louisiana and Cajun-style cooking.  It's a spiced, heavily-smoked pork sausage, and you can probably find it in your local grocery store.

I opted to thinly slice the andouille on a diagonal in order to maximize the surface area.  I like a nice char on sausages, especially when they're only one component of a dish.  It's an easy way to build flavor.  What's nice about this recipe is, you get so much flavor from the sausage, onions, and cauliflower, plus the richness from the pureed potato and cauliflower mixture, that you don't need to add any butter or cream to get a creamy, hearty soup.

If you're going to make this recipe and you want to follow Sara Moulton's original, you can click through to the link.  However, I would still suggest that you read through my recipe - dear Sara leaves a few helpful hints out, and I might be able to save you some time (and dishes to wash).

Peel potato and slice thinly.  Wash cauliflower, then cut off two cups of florets.  Chop the rest of the cauliflower into small pieces.  Set vegetables aside.

In a large stockpot (use a stockpot!  not a "saucepan" as Sara suggests, unless you have one that's at least 3 quarts, in which case, you can use that), so anyway, in the stockpot, heat the olive oil over medium high heat.  Add the sausage and brown, tossing to char it evenly.  Remove with a slotted spoon and set aside on a plate.  Add the onions to the oil.  Cook until onions are tender and caramelized.

To the pot, add broth, water, chopped cauliflower (reserve the florets), and potato.  Bring to a boil over high heat, then reduce to medium-high heat and simmer for at least five minutes, or until vegetables are extremely tender.

Stir reserved cauliflower florets into puree and simmer until tender (I did the 4 minutes suggested, which was a bit short, I'd add another couple minutes to that time).  Stir in chorizo and spinach, add salt and pepper to taste.  Garnish bowls of soup with a sprinkling of paprika. 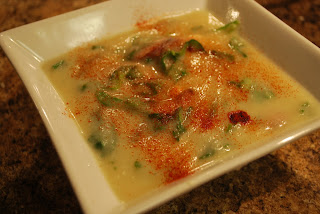 This is a healthy, hearty soup that will please everyone in your family.  The cauliflower sweetens as it cooks, imparting a mild flavor to the puree.  The color from the ribbons of spinach, the smoky andouille, and the bright paprika make this soup pleasing to the eye as well as the palate.  Add this to next week's meal plan - you won't be disappointed!