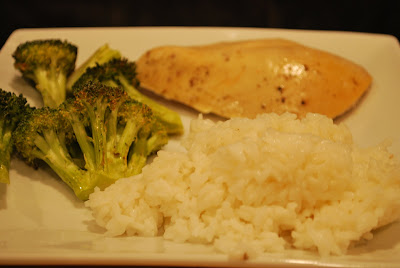 I have roasted a chicken in my Crock-Pot before, but this time I wanted to make a few changes.
First, I wanted it to be less fatty, so that stick of butter had to go. And after reading one of the Crockpot Lady's chicken recipes, so did the skin. Oh, the skin. By the time I was done removing it, I was a) horrified by how much fat must have been in the chicken I made last time, and b) completely grossed out by raw chickens in general. There is a lot of skin. And it feels gross. And it's yucky to touch it and cut it. But here's the thing: it's yuckier to leave it on. Agreed? So off it came. It didn't take me quite as long as it took Stephanie (the Crockpot Lady) but then, I'm not as zealous about raw meat and fat as she is. I will say this: if you don't own a pair of kitchen shears, buy them if you are going to skin something. You won't be sorry. This job would be much more disgusting with a knife. Just trust me.
Now, what else did I want to change? Right, I wanted a non-garlicky recipe. Certainly not because my adoration of garlic has diminished...simply because I am out and not going to the store until tonight.
Lastly, I wanted a milder chicken recipe so that I could make a more simplistic chicken broth without the complication or other flavors.

So, I followed Stephanie's recipe. She's right, it's really bland, and not necessarily something you'd want to eat by itself. I served the chicken with white rice and roasted broccoli. It was a nice meal, but nothing to write home about.

What I was most excited about was the leftover meat and the bones. That may sound silly, but I was looking forward to making chicken broth. The three cups of cooked chicken I had leftover, I saved and used for the Crock Pot Lady's Buffalo Chicken Lasagne.

Chicken Broth
All of the bones and gross pieces of carcass (gross word!) that were left over, I put into a big stock pot with three broccoli stalks (from the roasted broccoli I made), a big handful of baby carrots that I halved, and two quartered onions that were about to spoil. 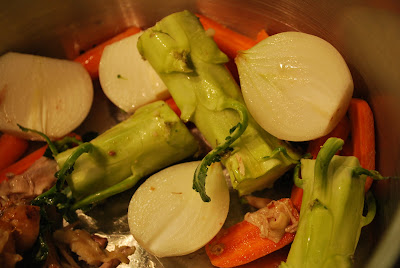 I added water to within a few inches of the top of the pot. Cover, bring to a low boil, then turn the heat down to a simmer. I also added salt, pepper, bay leaves, and oregano. I simmered the broth for a total of five hours or so over two days, and this is what it looked like: 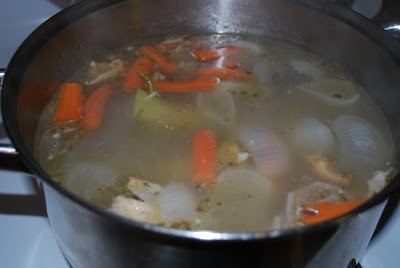 When I was done with the broth, I strained it into a smaller pot and let it cool. 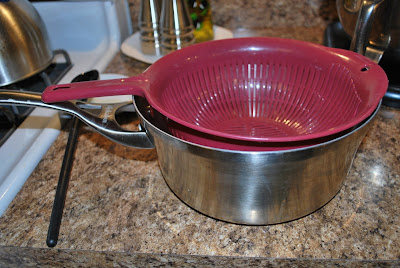 I then funneled it into a clean milk jug. I'll store it in the fridge until I use it to make chicken noodle soup this weekend.

The small chicken I bought was on sale for $0.79/lb. I think the grand total was around $3. So for that, plus the cost of the bottom of the salad dressing bottle, the handful of carrots, old onions, and broccoli stalks I would have thrown away, I made: the whole roasted chicken, 10 cups of chicken broth, and all the chicken I needed to make a Buffalo Chicken Lasagne. Frugal and delicious!