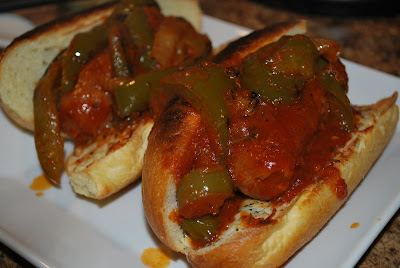 So, if you're from Connecticut, chances are you read the title of my post and thought "yum, sausage grinders!" If you are from anywhere else, you probably read the title of my post and thought, "um, what's a grinder?" If there's one thing I've learned living in the Midwest, it's that nobody else calls it a grinder! Well, let me clear this up for you people: a grinder is also known as a hoagie, a sub, a footlong, a sandwich, and on and on!

Throughout high school and college, I worked at a pizza restaurant - Teddy's. My very first job there was as a pizza girl. My life consisted of making the pizzas and grinders, taking orders over the phone, and working the cash register. It was a fun job and we were allowed to eat pretty much whatever we wanted. Some of the most popular grinders we offered were the "parms" - chicken, eggplant, and sausage. Now, Andrew loves a good sausage sandwich, and I thought I could put together a sausage parm grinder for him that would knock his socks off.


I started out by sauteeing three peppers and two onions, sliced into hefty strips, in a little bit of olive oil. I wanted to get a good char on these veggies before I added them to the sauce, so no salt yet! Salt will cause them to start breaking down and releasing their water, which will make them take much longer to blacken up nicely. 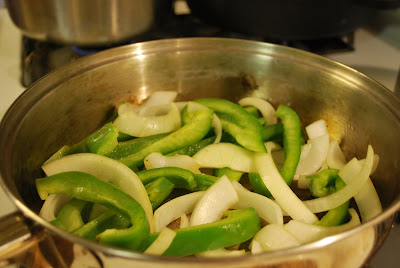 In the meantime, I added the sausage to a pot of homemade sauce. If you don't have any in your freezer, or you don't like to make your own, use your favorite brand of *gasp* jarred sauce.

Once the veggies are soft and blackened, I add those to the sauce pot too. 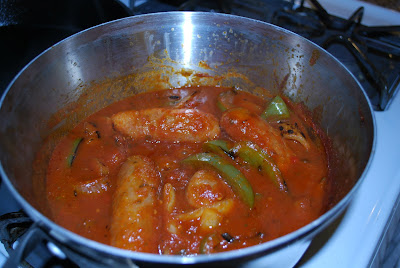 I let this sit on the stove for several hours, mostly because I cooked this on my lunch break and we weren't eating it until dinner time. 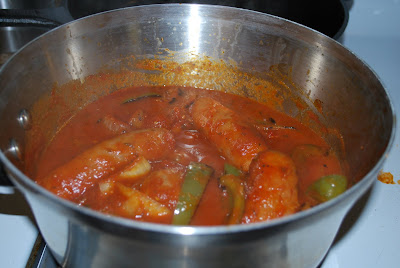 Now, time to prepare your sandwiches! Slice grinder rolls lengthwise, leaving the roll connected on one side. Sprinkle one side of the bread with grated mozzarella and Italian seasonings. Broil for a few moments. Try not to forget you put the rolls in the oven. 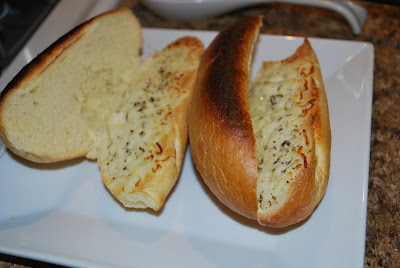 Add a sausage link to the roll, then top with peppers, onions, and sauce. Feel free to add more cheese if you want!

Andrew was really happy with his grinders. I think he was just as happy to hear someone else around here calling them grinders! Whatever you want to call them, these sandwiches are yummy, easy, and hearty enough that they can be a simple weeknight dinner when paired with a salad.