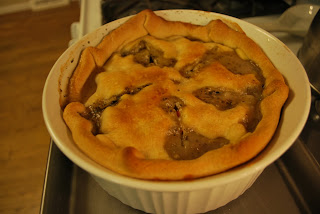 I've presented several versions of pot pie before.  In the past, they've always been a "cheater" version that uses canned/frozen ingredients, which is a departure from my usual style of fresh produce and "from scratch" sauces.  The notion of a truly homemade pot pie has been on my mind for a while, and though this one is a step closer, I did still take some help from the store in the form of a refrigerated pie crust.

Preheat the oven to 425 degrees.

In a large skillet, melt two tablespoons of the butter over medium-high heat.  Add the onions, carrots, parsley, oregano, salt, and pepper.  Cook until onions are translucent and carrots are slightly softened.  Stir in the chicken stock and bring mixture to a boil.  Add the potatoes and cook until they are just fork tender.

In a medium saucepan, melt the remaining two tablespoons of butter.  Add the turkey and the flour.  Pour in the milk and heat the mixture.  Combine the turkey mixture with the vegetables in the large skillet.  Cook until the sauce has thickened a bit.

Pour the mixture into a 2 quart oven-safe dish. 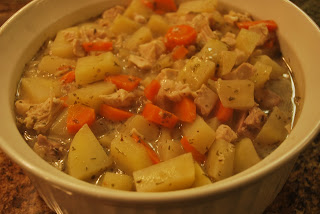 Top with the piecrust.  Slit holes in the top for ventilation.  Place on a cookie sheet in case of spillover.  This also makes moving the pie in and out of the oven much easier. Place pie in the oven for 15 minutes.  Reduce oven temperature to 350 degrees and bake another 20 minutes or until crust is golden brown.

Remove from oven and let stand 5-10 minutes.  Slice and serve.  We used bowls to catch all the delicious sauce! 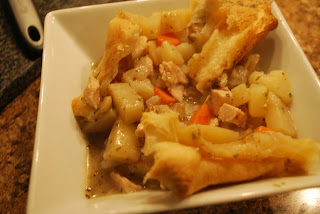 I'm tagging this post for turkey and chicken because you could easily sub the latter into this recipe!
Posted by Amy at 10:44 PM