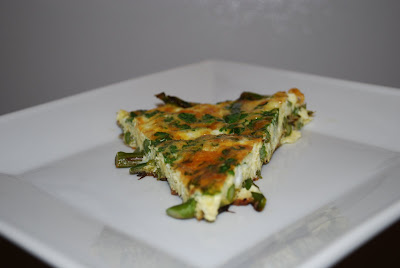 I adapted Aida Mollenkamp's recipe on Food Network for an Asparagus & Jack Cheese Frittata. I had never made a frittata before, so I really wanted to learn the method so that I can mix and match ingredients.
I used my cast iron skillet to saute the asparagus in the oil/butter mixture. I thought the cast iron gave the asparagus a roasted flavor - it really added something to the taste of the frittata. 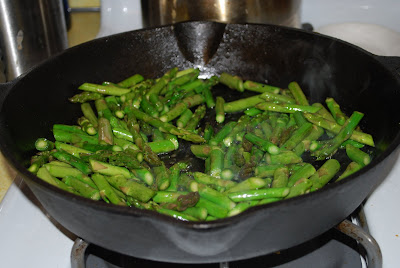 I'm glad I followed a recipe so I could learn the timing - how long to cook on the stove and how long to cook in the oven. The instructions were very easy to follow. I used one less egg than was called for (7 instead of 8) because that's all I had! Other swaps included using olive oil instead of the suggested vegetable oil and fresh flat leaf parsley instead of cilantro.
I was a little nervous when I added the egg mixture, since I was one short, but I spread it out with a spatula and it covered the asparagus and started cooking nicely. 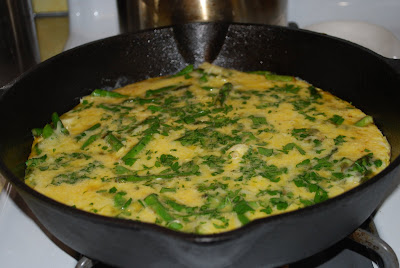 The frittata was light and fluffy, the asparagus was slightly charred from roasting in the cast iron skillet, and the jack cheese added just the right tang and bite without overpowering the dish.
Honestly, the hardest part of this recipe was lifting the skillet in and out of the oven. The thing must weigh a good fifteen pounds empty. I'm going to weigh it and let you know how much it weighs. Maybe I'm exaggerating. Maybe I need to work out a bit more. (Update: I weighed it - 11 pounds!) 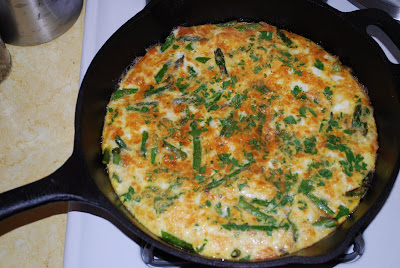 Look at all that good green stuff ^ This recipe is healthy, filling, satisfying, and pretty - basically everything I require in my food!
Posted by Amy at 9:28 PM