I was in Connecticut last weekend visiting my family, and somehow ended up eating my way through the state. Be on the lookout this week for my restaurant reviews - in the three days I was in town, I ate at four different restaurants, all of them new to me.
Lunch on Saturday was at Mediza, a tiny jewel just off LaSalle Street in West Hartford Center. The restaurant is small, but the food is authentic, the service prompt, and the flavors are amazing. My mom suggested we do a girls lunch and my friend Kristi suggested the place. She and I were thrilled to hang out with our moms for the afternoon.
We started with the Mediterranean Sampler, a fabulous combination of "babaganoush, hoomoos, tahini and falafel" - the babaganoush was stellar. The pita bread is homemade - light and floury, it makes the perfect dipper.
For lunch, I opted for one of the specials - a Pesto Shrimp Salad in a Lemon Truffle Vinagrette. Though I asked for the dressing on the side, it was brought already mixed in. It worked out fine, as the salad of arugula, grape tomatoes, red onion, and pesto-coated shrimp was lightly dressed. The vinagrette was a nice balance of rich and light - the truffle and lemon were well paired.
My mom and Marlies split the Fall Goat Cheese Salad and the Chicken and Avocado Panini. Kristi opted for the house soup - a Spicy Vegetarian Lentil that we found to be not at all spicy, but still rather delicious, and the Falafel. Kristi maintains that her lentil soup far surpasses Mediza's, so stay tuned for that recipe at a later date.
After lunch, we all ordered coffee and tea while Kristi and I decided to attempt dessert. We decided to split the Baklava with Fig Ice Cream. The ice cream was divine, but the baklava left something to be desired. It was served cold, and shaped into a cigar - nowhere near enough layers, nowhere near enough honey, and nowhere near the right texture.
Overall, we really liked Mediza and agreed we'd return. Their dinner menu looks just as varied and delicious, with offerings including Pan Seared Sea Scallops with butternut squash risotto and Moroccan Glazed Organic Pork Chop.
Kristi and I have been friends forever, and it's always great to see her. Here's a photo of us in Boston for my Bachelorette Party - I'm the one with the veil! 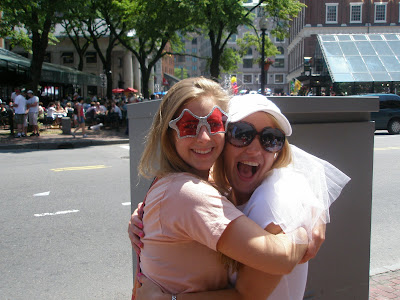 mmmmmmmmmmmmm Medizalicious.....come home so we can eat there again!! (or some other yummy place for you to review)