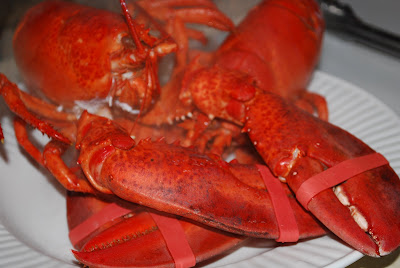 Our New Year's plans were thwarted by the weather, so at the last minute, we decided to create a smorgasboard of nibblies and hang in to avoid the snow. Andrew and I hit the grocery store for a few last-minute items, and we came up with some great stuff.

As you can see above, we had lobster - two of them for the three of us. We bought live lobsters, and to cook them, I simply submerged them in boiling water for ten minutes. I melted butter at the same time for dipping, and the lobsters were perfectly cooked and delicious.

Before the lobster, we had a few appetizers. My mom made potato skins using chopped cooked bacon and cheddar cheese, and they were fantastic.

Andrew always wants meat in everything, so we had to come up with something to fill him up. Crostini are a favorite of mine, so that's what we decided on.

Slice a baguette on an angle, arrange slices on a cookie sheet, and spray with olive oil cooking spray. Toast in the oven until bread is crisp. Spread a garlic and herb soft cheese on the toasted crostini (I used Alouette brand).

Next, salt, pepper, and sear a flattened piece of roast beef. Allow the beef to stand ten minutes, then slice the roast beef on a bias into thin strips. Top the bread and cheese with the slices of roast beef. 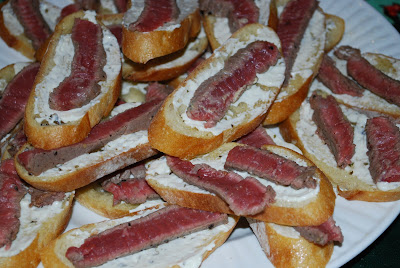 I made a simple beef au jus to serve with the crostini, at Andrew's request.

I came up with the idea for French Onion Bites when I saw that my mom had phyllo dough shells in her freezer. This was so simple - I just carmelized thinly sliced onions in a skillet, portioned them into the shells, and topped with a shredded five-cheese Italian blend. Bake at 350 until cheese is melted. Spooning a bit of the roast beef au jus into the onion cups added amazing flavor and texture! 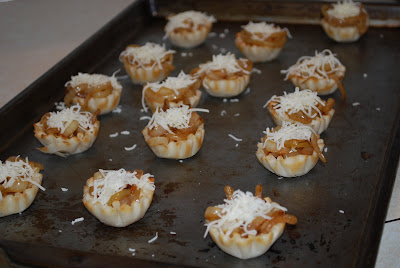 Finally, we had creampuffs for dessert. I love the frozen creampuffs from the grocery store, and I drizzled them with chocolate syrup, and served more alongside for dipping. They look fancy, taste awesome, and require absolutely no effort! 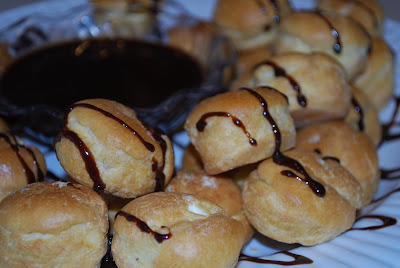 We ended up being so glad that we stayed in. The food was great, the champagne (and wine, and daiquiris) were flowing, and we were so thankful to be with family. Happy New Year!