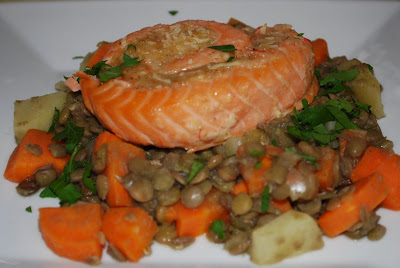 I received the Williams-Sonoma cookbook Essentials of Healthful Cooking as a gift, and had yet to make anything in the book. I have so many cookbooks, yet I keep requesting them as gifts and buying them for myself. I sat down and flagged a bunch of recipes in this one, then decided to add one to my menu plan for the week. 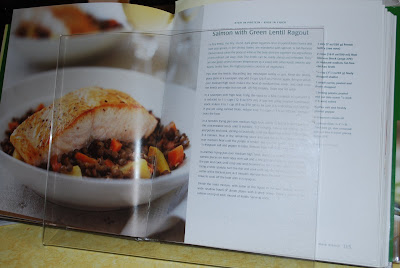 I edited the recipe when I found beautiful crab-stuffed salmon pinwheels with a Manager's Special tag on them during my grocery run. I've reproduced the green lentil ragout recipe below.

*A good way to cut large carrots is to halve them first, then cut them into equal sized pieces. I cut the halved carrot vertically to about the point where the width of the small end is almost the same as the width of the halves. Then I can cut crosswise all the way down the carrot without having to then cut each of the half moons in half again. 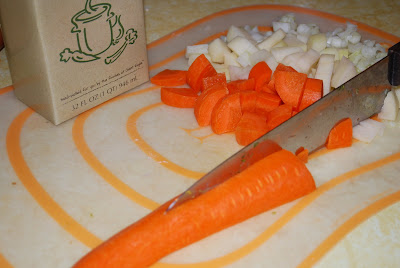 Rinse the lentils in a fine mesh seive, picking through to remove any that may be misshapen. Place into a saucepan with 3 cups of water, bring to a boil over medium-high heat, then lower heat to medium-low and cover. The recipe says to cook 45-50 minutes, but this is WAY too long. Cook them for 30 minutes tops or they will be mush! 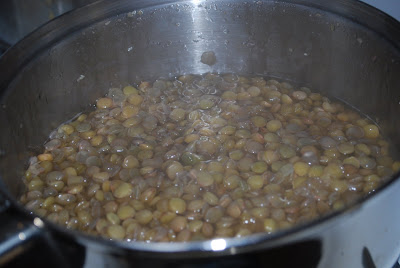 In a saucepan over medium-high heat, bring the chicken broth to a boil. Allow to boil until broth is reduced to 1-1/2 cups and remove from the heat.

In a nonstick frying pan, warm 1/2 cup of the reduced stock until it bubbles, then add onion, carrot, and potato. Cook until liquid has almost evaporated (3-4 minutes). 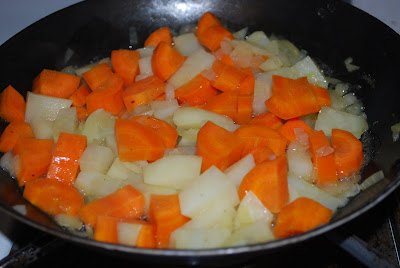 At this point, I packaged the vegetables and the lentils separately. I cooked this ahead of time on Sunday for a meal I was planning for Monday. Obviously, if you wanted to cook this all at once, you could skip this part. 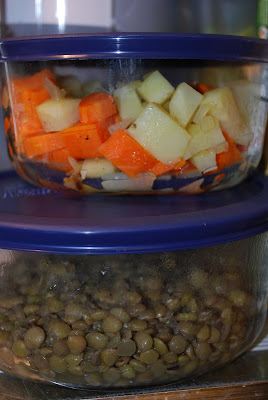 *Since I refrigerated both the lentils and the veggies, I took them out of the fridge about 20 minutes before I wanted to cook dinner so they could start to come to room temperature. Then I added the veggies to the frying pan and caught up with the recipe here:

Pour in the remaining stock and add the cooked lentils. Simmer over medium heat until liquid is mostly absorbed. Stir in salt, pepper, and at least a teaspoon of Adobo. The lentil-veggie mixture will be relatively bland, so season liberally.

I baked the salmon pinwheels in the oven at 375 for about 15 minutes, until the fish was flaky and the stuffing heated through. I spooned the lentil mixture onto plates, topped with the pinwheels, and garnished with fresh parsley.

The lentil mixture left something to be desired. If I hadn't added garlic salt and Adobo, there would have been no flavor! Andrew didn't love the lentils, and neither did I. I'm glad I learned the method, but I don't know that I would do this again. The pinwheels were fantastic, and I will probably try to recreate them using a homemade stuffing and salmon fillets.

There are still recipes I want to try out of the Wills cookbook, but lentil ragout only got half a thumbs up from us.
Posted by Amy at 6:55 PM